Please Pass on the Left 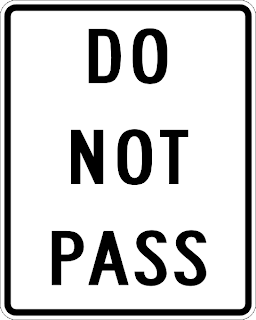 Normally, this is not a hard concept. Passing on the left is something you learn in drivers education. It is enforced in the practical part of driving on a highway. It is reviewed on the written test! Again this is a fool proof concept, yet people still insist on passing on the right. I'm even guilty of passing on the right but only when there is an idiot who won't get out of the passing lane and is going painfully slow.

Our most common problem is people passing our stop signs while we are loading or unloading children. When they are caught by the police, they always claim they never saw the big yellow bus or thought they could "beat the bus". Sadly, this means they play chicken with children's lives. We can lecture children all day on the proper way to cross a street, board a bus, and debark from the bus, but the fact of the matter is, children get excited, forget instructions, and often dash out in the road without any regard for their own safety. What appalls me even more is when people insist on passing on the right (door side) of the bus as we are letting children off. Several children have either had close calls, or been struck in their own driveways due to the carelessness of ADULT drivers.

You would think bus drivers understand this concept more than the regular driver. Right? Wrong! This morning, a bus driver came around my bus on school property, coming between my bus and the school bus loop sidewalk on the RIGHT side of my bus. She got within 4 feet of my door, noticed it was open and stopped, but only momentarily. I saw her out of the corner of my eye, and grabbed the middle school child getting off and told her to STOP. After the driver of the other bus determined we were not letting any children off due to her reckless behavior, she continued up past the door. She did not call us over the cb radio to apologize or ask if we were letting children off.

Naturally, I took this incident to the bossman.

The First Day of School!!!!

Today was wonderful. I felt right at home on the big yellow bus. It felt totally natural behind the wheel. I had about 20 kids on the bus this morning and I greeted all of them with a good morning and a smile on my face. They were all excitedly chattering and ready for the first day. I found myself realizing that I missed the kids!

Things went very smoothly for the morning. Some kids did get left at their stops (or the driver forgot them), but overall the kids got to school safely. On my bus, I had a 7th grader who rode to the High School. His sister had informed me that he did not go to Middle School A, served by the bus, and instead is attending Middle School B across town by the High School. Unfortunately due to school zones, buses are only allowed to go to the schools they are assigned. We are not allowed to deviate out of school zones unless we are directed to by the Dispatcher.

When I got to the High School, the 7th grade boy tried to get off, but I stopped him and made him wait until I figured out what to do with him. Eventually I took him over to Middle School B and dropped him off for the day. Apparently he is considered a "School Option" child. When our schools do not make AYP (Adequate Yearly Progress) as defined by test scores by the state, then the school has to offer other school options. We have 5 elementary schools, 2 middle schools, and one high school. Middle School A did not make AYP so kids that normally would attend Middle School A have the option of attending Middle School B instead.

Apparently there is supposed to be a bus that transports School Option children from one middle school to the other. This was not told to us at the meeting we had on Monday, nor did I receive a list of children whom have elected to participate in the school option.

Anyways, that was the only hang up I experienced today. The afternoon went equally as smoothly with very little time delays. Students got home relatively close to normal time and it seemed we operated as a well oiled machine. People just fell into place, kids did what they were supposed to, and parents seemingly stayed calm. Unfortunately, the real chaos will occur in a few days when parents stop taking their children to school and buses start to fill up. Parents will complain, buses will get crowded, and kids will fall out of honeymoon stage.

I was babysitting today for a friend of mine and the kids and I went to McDonalds. The bonus of most Mickey D's is that their play place is located inside and is in an air conditioned area. The only place that would trump Mickey D's indoor play area would be the play area in one of the Burger Kings when I was growing up.

I also realized, most of the playground equipment is now made of hardened plastic. There are very rare playgrounds filled with the metal equipment that I played with as a kid. I distinctly remember our playground was all metal equipment and hard ground. There were no wood chips or sawdust, or sand, to break our falls. Only hard dirt. There were also plenty of tree roots that would spring up when we would play tag. It would almost be like the trees wanted to play tag with us.

I digress. I was sitting at Mickey D's enjoying my burger when one of the girls I was babysitting has the following exchange with her sister:

Girl 1 - (looking at the little smurf figurines that they have in kids meals) Why do they call him Papa Smurf. He isn't the father of all those smurfs!