Nemo On Ice meets My Car

November has been a whirlwind month for me. Early in the month, I mentioned that I was going to see Nemo On Ice and that a personal situation was taking up much of my time. Then Thanksgiving happened, I had family come and visit, and as such, have not been able to update as frequently as I'd have liked to.

Nemo On Ice was really cute and very well put together. It basically followed the movie and had some new fun songs. The skaters were really talented and managed some very difficult moves on ice wearing huge fish costumes that would have put me on my butt! The drive up and back was relatively uneventful except the teachers on my bus were questioning every driving decision I made. They were speaking amongst themselves but were quite loud and obnoxious about openly debating why we were taking X road instead of Y road, and how we could be there faster if we had done Y and Z instead of W and X. Part of me wanted to pull the bus over, get up and tell them that they can drive. Then we hit traffic on the way in as always happens when the Civic Center has a huge child friendly production, and they proceeded to complain about THAT! The rest of the trip went without incident.

After driving all day and dealing with grouchy teachers, I was on my way home when a lady ran a stop sign causing me to hit the brakes. Despite all my efforts, we collided. She was traveling so fast that she pulled my car 90 degrees to the right with her momentum, and when we disconnected, I hit a stop sign. It flattened. My airbags did NOT go off and I was miraculously not hurt. My car was deemed a total loss. I couldn't post about it until the issue had completely resolved. RIP 2001 Honda Accord. 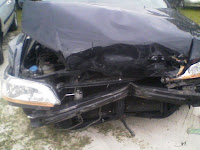 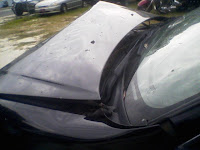 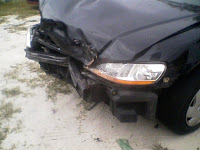 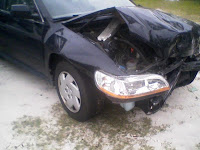 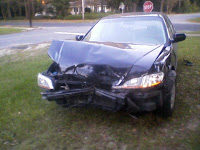