Will be checking in off and on throughout the summer, but will not blog much until august, i am on vacation.
Posted by The Bus Driver at 4:10 PM 1 comment:

This is an open letter to any governor of any state. Please feel free to use this letter as a form to create your own letters to your state representatives and governor.

Dear Mr. Governor of your State,

I am a resident of Town, State located in County. One of my increasing concerns is the rise of the fuel prices as apparent across America. This fuel crisis has many counties looking at ways to conserve its resources. Among those in concern are transportation issues surrounding schools, or "How do we keep the school buses running on a limited budget?" I have an idea that may help the State cut back on its use of fuel in education transportation, but it needs to be included as an alternative to the current law.

Currently State Law (will vary by state but i put the number here) allows for 180 days of instruction to be required. There is no current mention as to the required hours of education per day a student must receive outside of the home school requirements. An option to decrease the use of fuel is the implementation of a 4-day school week. If the law were amended to include an opportunity for local school boards to implement a 4-day school week instead of a 5-day school week and base the education of students on hours of instruction instead of days, there would be a 20 percent decrease in the fuel usage of all school buses that transport children. It would also save the district money that can be used on other items, allow parents to schedule appointments for the "off" weekday, thereby increasing attendance, and provide for school districts to schedule teacher work days and other staff development days on the "off" days as well as allow teachers to offer a flexible tutoring schedule for those struggling students. A conversion to a 4-day school week would increase the amount of time spent in school per day by approximately 1 hour allowing teachers to spend extended time on subjects in which students typically struggle.

I hope that this alternative can be considered in the future of State's development toward a more sustainable future. I can be reached by telephone at 555-555-5555, or through email at.

Step right up and see the newest Carnival of Education. There's lots of games and prizes to be had. My post on Behavior Issues and Parents is included in this carnival. Enjoy!

Its every child’s dream, a four-day school week. Why are schools considering this change over in their schedules? Simple. Money.

The cost of living is increasing every day. Inflation is hitting our grocery stores, gas pumps, and wallets. With the increase in everyday items, the schools are also feeling the pinch in budgeting their money wisely. As a result, items get cut from the budget, things get rearranged, and things tend to go from bad to worse. The solution? School weeks that are only 4 days long. Recently, this concept is becoming more and more attractive to school districts.

Across America, some school districts are considering this alternative to the budget problems.


This is not a new concept either, some districts considered this as a solution to the budget problems in the late 90’s.


I am in favor of this alternative 4-day school week. The benefits that have been outlined by other school districts look promising. First off, there is the convenience of having a single weekday to schedule all those appointments. Secondly, attendance has been projected to increase due to the ability to schedule appointments on the “off” day – some school districts that have implemented this 4-day school week system have proved this projection. Third, money is saved from the decrease in the use of school buses, and decrease in the need to heat and cool schools. Lastly, the ability of schools to provide extra time for tutoring, sports, and other academic needs is increased with the flexibility of the weekday available, it also provides for the further development of staff reducing the need to have “staff only workdays”.

At first when I saw this "Carnival of Education" on another blog, I wasn't entirely sure what it was. Now I realise its a whole bunch of useful information piled into a single blog, usually hosted by someone. Here is the current "Carnival" over at Educationwonk. Enjoy!

http://educationwonk.blogspot.com/2008/06/carnival-of-education-week-174.html
Posted by The Bus Driver at 1:33 PM No comments:

For those that don’t know, I substitute on the buses. I don’t have a regular route that I do, so I end up learning and doing many different routes. Because I am employed as a full time employee, my position is considered a “floater” because I bounce around on many different buses.

It seems though that behavior issues are much larger and more apparent today than they were 15 years ago when I was in elementary school. I seem to have a lot of kids who misbehave on the bus. The children who ride the bus break many of the bus rules. Common rules found on the bus are:

1. Observe same conduct as in the classroom.
2. Be courteous, use no profane language.
3. Do not eat or drink on the bus.
4. Keep the bus clean.
5. Cooperate with the driver.
6. Do not smoke.
7. Do not be destructive.
8. Stay in your seat.
9. Keep head, hands, and feet inside the bus.
10. Bus driver is authorized to assign seats.

All of these rules are posted on a yellow sheet inside most school buses. 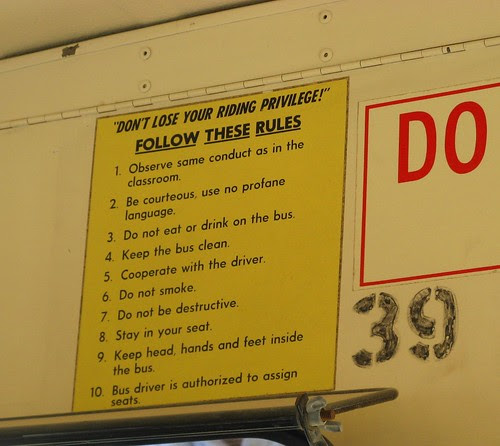 While some of these rules seem outdated by the language, they pretty much apply across the board. Some of the more common, unwritten rules are:

1. Safety zones around the outside of the bus.
2. Quiet at the railroad crossings.

Every rider who gets on the school bus should take each of these rules seriously. It seems though more and more we get massive behavior problems from the students who ride. Yes, the bus driver takes certain credibility with how their bus behaves, but there are many kids who disregard the rules completely. The most common rules that are broke are the eating and drinking rule, and the stay in your seat rule. These rules are followed by the no profane language rule, and the conduct in the classroom rule.

Everyday I deal with children who will not stay seated, who cuss me out, who get into fights with each other, and who constantly eat and drink on the bus – leaving the trash all over the floor of the bus. In some buses, it’s an everyday occurrence with the SAME students. The buses in my district are equipped with cameras that catch the students every move. Many times the tapes are useful in showing the principal or assistant principal exactly what a student is doing on the bus. It’s also helpful when a parent comes to the bus shop or the school claiming their children “couldn’t have been the one” to misbehave. After all, little Suzy or Johnny is an “angel”.

I believe the increase in the misbehavior on school buses and in schools is largely due to the increase in children who believe they are “entitled”. Discipline isn’t what it used to be over 20 years ago because it is considered to be “abusive” and “negative” on the child’s psyche. This entitlement shift has been the main reason why it is now “someone else’s” fault for the child’s misbehavior. Parents don’t want to take responsibility and discipline their children appropriately for misbehavior due to the thinking that discipline is bad for children. Increasingly, the schools are at a loss as to what to do with the child who misbehaves. Excuses are made for behavior problems. “Alternative” schools are created to “allow” these behavior problems to have an education anyways. It’s like saying to a child, “Its ok you misbehaved, and you won’t be held accountable for your actions because there are other options for you.”

Even so, children do not get removed from the riding PRIVILEGE or suffer the same consequences as many of us did when we were younger. We even cater to them by stopping “door to door” thereby wasting fuel and time. All respect is lost for adult authority because everyone makes excuses. Children will misbehave, but the excuses need to stop.